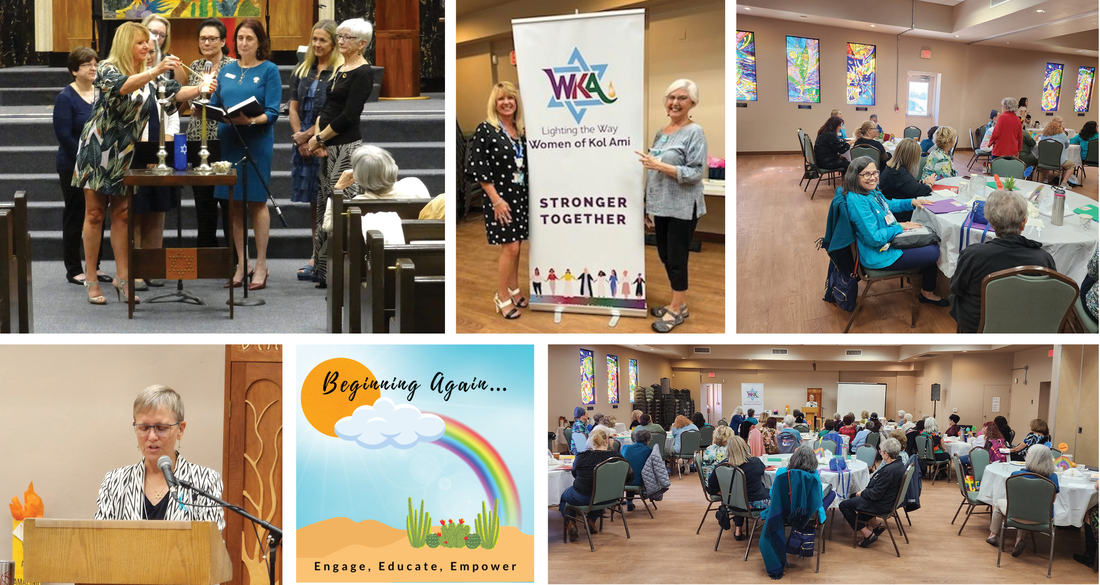 Being with sisters and community is a beautiful thing. While COVID has not left us and probably never will, the return of in person events has been welcome and reinvigorating for many of us. Women of Kol Ami (WKA) hosted over 60 women at the PD SW Area Event which was held in Tucson, Arizona at the end of October. We kicked off our event with keynote speaker Amelia Cramer. Amelia’s bio is very impressive, ranging from her recent retirement as Chief Deputy Pima County Attorney to chairing the Criminal Justice Committee and being the past President of the State Bar Association of Arizona! Amelia shared with us her personal journey and judicial struggle to marry and be recognized as the spouse to her wife, Amy. They just celebrated their 25th anniversary.  It was a very personal, informative, and eye-opening presentation.

From there we shared lunch and conversation, breaking out to workshops ranging from Yammer training, WRJ Says STOP, Canva Class, Wacky Membership, music, and meditation. There was something for everyone.

We heard from Ariel Eisen, NFTY SW President who spoke to us about the importance of the YES fund donations and their benefits to our youth.

Dinner was served on the rooftop with music, songs and sharing. So much activity packed into the day!

We ended our weekend with an emotional tour of the Tucson Jewish History & Holocaust Museum.

The women of the SW PD came through with the collection of personal undergarments for the women at Sister Jose’s Women Shelter with our collection box overflowing.

It was a special weekend with Engagement, Education, Empowerment, and joy.
​
The WRJ SW PD women ROCK, and we are truly “Stronger Together”.

WRJ Pacific District Southwest's third annual Area Day, held on Saturday, October 12, 2019, was the largest SW Area Day yet. Over 50 women from five Sisterhoods met for a day of learning graciously hosted in Albuquerque, New Mexico by Congregation Albert Sisterhood. The theme of the day, "Listen, Speak, Act!" was carried out during the presentations, panel discussion and hands-on activities. Although she was greatly missed, Judie Ning, Immediate Past District President and long-time member of Congregation Albert, sent a video message welcoming us to her temple. Dana Adler, District President, gave the state of the District address and Ashley M. Biggers, author of 100 Things to do in Albuquerque, gave quick tips on what not to miss on our visit. Many of the women took advantage of attending the International Balloon Fiesta festivities.

The meeting was kicked off by a recorded message from Rep. Deb Haaland (D-Albuquerque), sharing her initiatives on equal pay, violence against women, universal childcare and early learning. She complimented us on our focus on the rights of asylum seekers, women and children. Next, we heard from various speakers on the status of immigration and the laws surrounding our border. Jessica Corley Jewish Asylum Seekers Initiative. Tina Wolfe, Sisterhood President of Temple Mt. Sinai in El Paso, Texas, spoke on how the community came together in support of the El Paso shooting victims. Her Sisterhood participated in a multidenomination prayer vigil the next evening for the victims and made meals for 80 first responders. Julia Wackenheim, WRJ Board Member and member of WRJPD Social Justice Task Force, discussed task force's priorities, such as immigration, gun control and women's reproductive rights. Norma Cohen, Sisterhood President of Temple Emanu-El in Tucson, Arizona, discussed the impact that shutting the border and building a wall has had on their community and on Nogales, Mexico, just across the border.

After a brief question and answer panel discussion, the group broke for a much-needed session of Chair Yoga lead by Congregation Albert's own Susan Citrin. Participants then had their choice of attending the following workshops :"What can we as women, congregants, Sisterhood women DO NOW?" led by Jessica Corley; "Learn how to have a successful legislative visit," led by Julia Wackenheim, and "Take time out!!! Refuel and rebalance," led by Rabbi Vicki Hollander.

After a full day of serious topics and workshops, we relaxed and busied our hands and hearts. Some chose to complete "get out the vote" postcards to take home and distribute (a non-partisan nudge). During the workshop, presented by Judith Binder, participants learned about the importance of voting and how few eligible voters actually vote. Another option was to finish blankets for foster children while Adie Grieser discussed the foster care system and provided information on the lack of foster care families. The third option was to paint messages of kindness on rocks with Robin Sena. Participants were then able to take the rocks home to display or give to others.

In the evening, after Wine Time and Havdalah, led by the sisters of Temple Emanu-El of Tempe, Area VP Sandy Anderson led a YES Fund campaign with the help of Maya Levy, President of NFTY North America. Her inspirational message about NFTY members feeling a part of WRJ led us to a very generous campaign. A new Area Day YES Fund record was achieved with 100% participation, four lifelines started and $3,597 raised. Just before dinner, WRJ PD 1st Vice-President Cher Krichmar gave us a sneak peek of District Convention 2020 to be held at the Hyatt Regency John Wayne Airport Newport Beach, October 22-25. A wonderful buffet dinner was served while we listened to a presentation by Congregation Albert's Cantor Barbara Finn titled "Jewish Music Standing on One Foot - An Interactive Adventure," about the history of Jewish composers who created the tunes to well-known Jewish prayers.

During the Closing Ceremony, each woman stated their feelings of the day in one word. Here are some of their feelings in the word art below. All in All, this day could not have happened without the help of several sisters coming together. 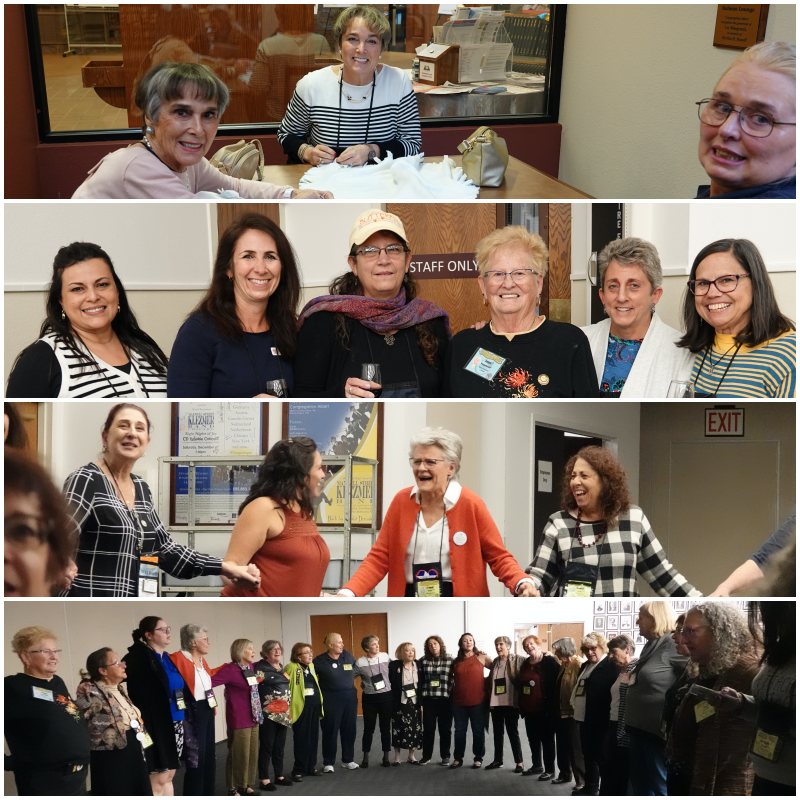 SCROLL DOWN TO READ ABOUT PAST PACIFIC SOUTHWEST AREA DAYS!

The sisterhoods in Nevada, Arizona, New Mexico, and West Texas took a break from the Southwest heat July 13-15, 2018, for the second-annual Southwest Area Day hosted by our newest sisterhood, Congregation Lev Shalom in the cool mountains of Flagstaff, AZ. The weekend, "ReJEWvinating in the Forest," included meals, speakers, workshops, social action and time to get acquainted. There was social time throughout, and an evening event at the home of the Lev Shalom Sisterhood president.

We began unofficially on Friday at Shabbat service, where we presented the charter and gavel to our new sisters. Then we split up into friend groups for "on your own" dinners  at two local favorites or at dinners hosted by local sisters.

Saturday we began with a Shabbat observance, combining spirituality, art, and community. An FBI special agent shared his experience in online crimes against children, and we discussed how to help meet this challenge.

We heard about WRJ's latest activities, those of our Pacific District, and the YES fund. We chose from four workshops and joined in a panel discussion regarding the "(Pink) Elephant in the Room": This year alone half of the ordained Reform rabbis and cantors are women. How does their experience as clergy differ from their male counterparts? Is it impacting us, as congregants -- as the role models for our children? And what about the lay leadership, where women are omnipresent?

Our guest speaker was SSRA (Supervisory Senior Resident Agent) Brian Fuller who entered duty as a Special Agent in May 2000 and was assigned to the Phoenix Division Headquarters City Office where he worked a variety of federal violations to include Insurance Fraud, Bank Robberies and Crimes Against Children. In 2001, SSRA Fuller was assigned to work Indian Country matters in the Phoenix area, which included homicides, child sexual abuse and violent assault cases. In 2010 SSRA he became Supervisory Special Agent in the Polygraph Unit in Washington, D.C (internal security polygraphs). In 2011, SSRA Fuller accepted a transfer to the Flagstaff Resident Agency where he continues his work in Indian Country and Polygraph and was promoted to Senior Supervisory Special Agent (SSRA) in 2017. Truthfully this speaker was stimulating!

Thank you to Temple Emanuel of Tempe, AZ for hosting!
​

The first ever WRJ Pacific District Southwest Region Area Day 2017 - a "real" SW area day has been decades in the making, and we welcomed many of you for this successful event! We had 40 women from Arizona and New Mexico gather at Temple Emanuel in Tempe, AZ, for a fun weekend of learning, sharing, and networking. The weekend began Friday evening with Kabbalat Shabbat and dinner out. Many participated in Shabbat morning services to celebrate the bat mitzvah of one of our former members. After lunch we heard a d'var Torah from Temple Emanuel's Rabbi Jason Bonder, and Temple Emanuel Past President Vivian Gealer and current URJ Board member, shared  tips and tricks for engaging volunteers.

District President Judie Ning delivered the State of the District and 1st VP Dana Adler gave an update on the 2018 Convention in San Diego, October 18-21. We broke into small group workshops to continue learning about leadership and personal growth. The social action discussion was followed by a project to gather cleaning supplies and toiletries for a local shelter. The evening activity featured an interactive activity focused on Jewish values. The day concluded with a wonderful Havdallah service and closing circle lead by Cantor Janece Cohen of Congregation Or Chadash in Tucson, AZ.

Thank you to all the women who came out to make it such a success! 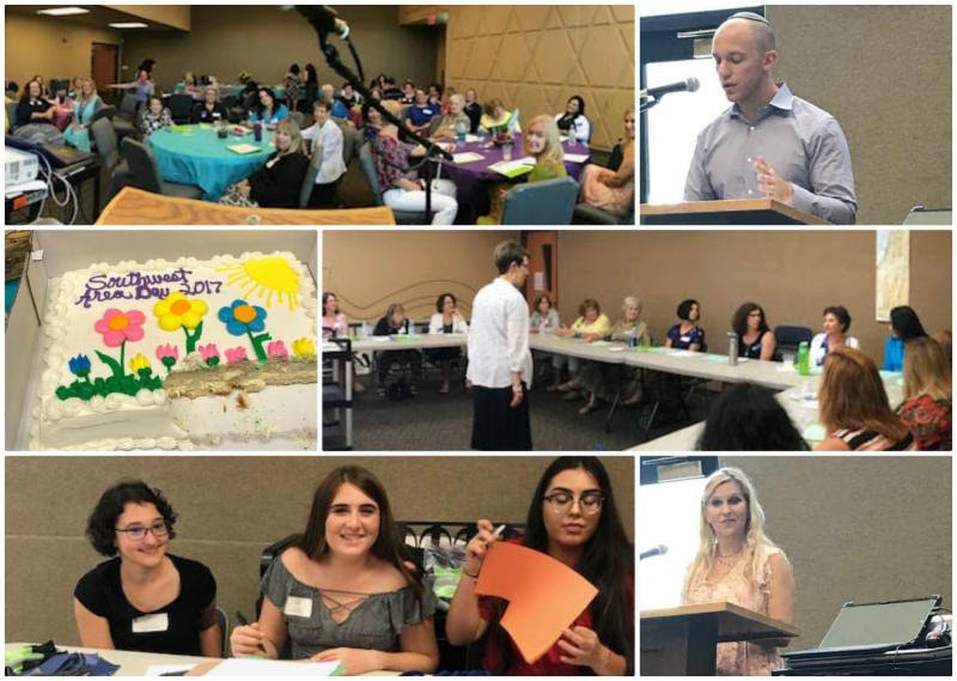