2012 Kavod Award for One Time Fundraiser 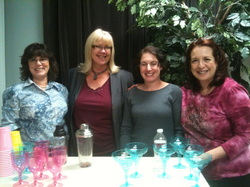 The Temple Beth Ami Sisterhood of Santa Clarita, California was awarded the 2012 Eleanor Krezter Kavod Award for its One Time Fundraiser for its Spa Day held on March 27, 2011 and January 15, 2012. As a result of its success, “Spa Day” has become an annual one-day fundraiser for the sisterhood.

Its “Spa Day” took place at Santa Clarita’s well-recognized Balance Point Spa, which had elevator access to the second floor where the spa is located.  The fundraiser raised $1,372 in 2011 and $1,425 in 2012, raising money for Temple Beth Ami’s Religious School Scholarship Fund.  The fund makes it possible to help a family pay for a last year of Hebrew School while also preparing for a bar or bat mitzvah.  During these financial hard-pressed times, these funds have proved to be essential to the family or families awarded a scholarship from the fund.

Approximately 42 women attended the 2012 Spa Day from 1-5 pm.  Upon entering the spa, women paid a $10.00 entrance fee which included a free drink, bought raffle tickets (with purchase of 10 tickets@ $20 women received a free *hand paraffin treatment) and a variety of spa services offered at a fraction of the normal cost.  Almost every woman that attended did actually make the above raffle ticket purchase in order to get the free hand paraffin treatment. Spa services included *hand paraffin and hand massage, 15 minute mini Swedish/custom back or foot massages ($15), Angel card reading or min-healing ($20), and mini-gelish manicures ($10).

The Spa Day flyer actually gave a full explanation about the entrance fee, raffle, spa services and vendors available so that each woman could chose and customize her own individual itinerary for her time spent from 1-5 p.m.  While waiting for services that they signed up for they relaxed, socialized, enjoyed food and drinks and also shopped.

2012 Kavod Award for One Time Fundraiser 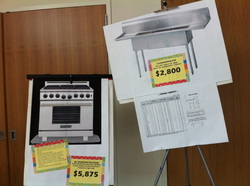 Kol Ami Women of Reform Judaism (“KAWRJ”)  of Vancouver, WA were awarded the 2012 Eleanor Krezter Kavod Award for One Time Fundraiser for their “Shower Our New Synagogue with Love: a Kitchen Shower”.  The shower was presented on Saturday, August 11, 2012.

Background:
On August 19, 2012, Congregation Kol Ami walked their Torah from its Learning Center to its new Synagogue at 7800 NE 119th St. Vancouver, WA.   This joyous and wonderful event  marked the beginning of its future in its new home.  September 6th was the official building dedication ceremony where it hung its mezzuzah and officially became a congregation with a home.

Purpose or goal – KAWRJ wished to stock the new Synagogue kitchen with needed supplies to be paid by donations.

Synopsis of Project:  KAWRJ  identified items needed to stock the new synagogue kitchen (janitorial, storage, knives, containers, linen, utensils) , purchased them, priced them at levels of $25, $36, $50, $65, $75, $100, $135 , $250 for items or bundles of items. Large appliances were identified and researched. Only the refrigerator was purchased in advance of the event (and sink was placed on order) because we knew we had to have these; other items (oven, range, dishwasher, freezer, outdoor grill) would not be purchased until there was money to do so.  For these, we gathered pictures of the equipment not present, and printed a photo with the cost on. These items were available to purchase in full or part.

One cashier just concentrated on selling these, working with those who expressed interest in a general or specific donation to get appliances completely sold. In the end, 2 families purchased the refrigerator, 1 family purchased the oven, about 6 families made donations of various sizes towards the range. This was preferable to people gifting to 8 different appliances, but none of them being fully purchased.

Once items were gathered, we used different colors of tissue paper to decorate them. We also used the tissue to identify the price levels so we could readily set up the room with prices scattered in hopes that people might be tempted to bump UP their giving when they saw a package they wanted to give regardless of the price it was.  (Ex: navy blue is $135, pink is $65, yellow is $25, etc).   The tissue helped create a “wrapped gift” atmosphere like a shower. So did serving cakes that said “Mazel Tov” and “Congratulations”, having balloons and party favors.

To maximize attendance at the shower, the evening began with BBQ supper (no cost to attend). Because it was Saturday evening, havdallah transitioned between the supper social, and the shower sale and social.  People could look over the available items throughout the evening, but cashiering only began after havdallah (so cashiers worked about 75 to 90 minutes.)

30 members helped with baking, shopping, wrapping, transport, set-up shower and BBQ, cashier, clean-up, wash new items before use. Husbands assured we had grills on and propane onsite, as well as BBQ-ed. During the actual event, there were 4 cashiers, someone assisted rabbi with Havdallah, a few people helped to stock the bbq, so most of the KAWRJ people involved did so before or after the event, so they could enjoy it too.

Although we didn’t know how many people to expect to attend, we hoped for a more than 80 as a summer social and to have enough people to purchase a good part of the items.   We knew that some items would not sell and we would continue to solicit these through monthly bulletin and/or blast email. At least 100 people of all ages attended. 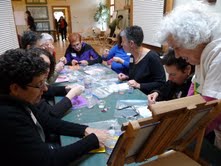 The Beth Am Women of Congregation Beth Am, of Los Altos Hills, CA were awarded the 2012 Eleanor Krezter Kavod Award for programming for their Creative Salon held on March 25, 2012.

This first-ever, one-of-a-kind all-day Creative Salon was designed to bring personal expression, imagination and fun to a whole new level.  The goal was attract women other than “the regulars” by doing something different in a place that was different.  The Creative Salon was held Sunday, March 25, 9:30 am to 4:30  pm at the Hidden Villa’s Dana Center,  Los Altos Hills, CA.


Summary - Attendees chose from over a dozen hands-on workshops designed to inspire women of all ages, interests and abilities.  Creative projects ranged from poetry, art and drama to fashion, jewelry making, nature's inspiration and outside-the-box thinking games.  The attendees had opportunities to express themselves, learn something new, follow their imaginations as they made new friends, discovere hidden talents and relax among the trees at a nature center tucked away in the hills.

Outcome – Attendees had a great time in community with each other.  They met new women with shared creative interests and Beth Am Women increased awareness of and interest in its ongoing knitting, poetry and book groups. Most workshop leaders volunteered to teach again as did some attendee. Very high satisfaction ratings were received from participants with 95%+ rating excellent/good for the overall Creative Salon, the choice of workshop topics, the quality of workshops and leaders, the organization of the day's activities, and lunch options and quality.

Unique Location: We chose Hidden Villa, a beautiful, farm setting with multiple meeting rooms and a central gathering space that is accessible to those with disabilities.  The advantage was it was very close to the temple (less than a 15 minute drive) yet felt very removed from everyone’s day-to-day life. It also enabled a session on the study and harvest of growing herbs to make several medicinal teas, which were sampled by all at lunch.  However, the Creative Salon’s success was not dependent on the location.

Materials needed on the day of salon

The goal of this program was to offer help, discussion, and resources for families in dealing with the problem of bullying in our society. Intentional exclusion, gossip, the silent treatment, teasing and the spreading of rumors are often dismissed as normal rites of passage, but research shows these behaviors are a form of emotional bullying and they are as harmful as physical bullying - with devastating long-term effects. We learned more about relational aggression (the use of relationships to manipulate and hurt others) including the latest research findings, the nature of boys' and girls' friendships, cyber-bullying, as well as tips, tools, and resources to help empower children in their social world.

Synopsis: This program about our kids' social world was put together by the sisterhood's program committee in response to the very real problem of bullying, whether the actual physical abuse or emotional bullying. The program was aimed at parents or grandparents and was open to all congregants and members of the general community. Sisterhood partnered with the religious school to present this program. The religious school director was very enthusiastic about offering this type of community service to parents and sisterhood was able to engage and pay for the speaker.

The nationally acclaimed local author, Trudy Ludwig presented the problem with research and tips and resources in how-to deal with situations. There was a question and answer period at the end. Trudy's books were for sale and a list of resources was available to participants. Coffee and cake was offered afterwards.

Project Involvement: About 3-4 committee members planned the program and publicized it. About 30 people attended. The target group was the religious school parents and providing a service to them.