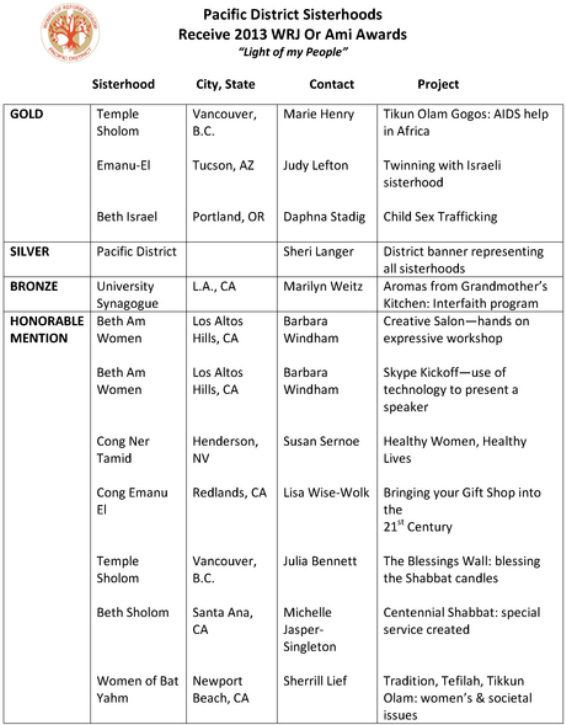 The Magic of the OR AMI

Recently, we learned which sisterhoods had earned a WRJ Or Ami Award for Special Achievement, to be presented at the Assembly this December. This award honors sisterhoods and districts undertaking distinctive and significant social justice programs, community service, or educational projects, which can be replicated or adapted. Proudly, many sisterhoods in Pacific District were honored. But it has also come to our attention how the award and the significant work, planning, and collaboration behind the award may have many important offshoots.

We are featuring here a summary of the programs for which our Pacific District sisterhoods won a gold, silver or bronze Or Ami Award. You can see how there has been a powerful ripple effect that is ongoing. Thank you all for your continuing work to make a difference.

Beth Israel Sisterhood in Portland won a Gold Or Ami for a program on child trafficking. 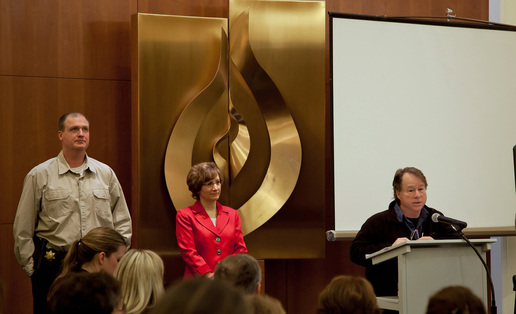 Book clubs in the area are now reading books on this subject and have asked Daphna Stadig, the chair for this project, to be a speaker. And Daphna has been contacted by women across North America and is making plans to meet them at the San Diego Assembly to talk about this project and ways to replicate it.
GOLD

Temple Sholom Sisterhood in Vancouver BC won a “gold” WRJ Or Ami award for its program Tikun Olam Gogos.  Although it is wonderful to be honored with this award, the biggest rewards go to the recipients of this social justice program.

Tikun Olam Gogos were formed as a local fund-raising chapter of the Grandmothers Campaign for The Stephen Lewis Foundation.  The foundation is based in Canada but is now active in the USA and United Kingdom. 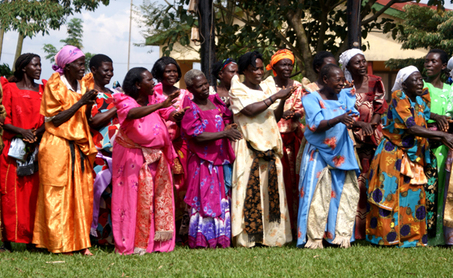 The Stephen Lewis Foundation (SLF) works with community-level organizations which are turning the tide of HIV/AIDS in Africa by providing care and support to women, orphaned children, grandmothers and people living with HIV and AIDS. Since 2003, they have funded over 700 initiatives, partnering with 300 community-based organizations in the 15 African countries hardest hit by the pandemic.

Our Sisterhood’s Tikun Olam Gogos are very proud of the fact that they have raised over $30,000 for these initiatives since they started nearly 3 years ago.  It would be difficult to tell just how many lives have been affected, saved or bettered by that funding. Tikun Olam Gogos, which is one of nearly 30 groups in British Columbia, meets every month to discuss projects and work on the creation and sale of beautiful tote bags that have become the mainstay of our fundraising efforts. 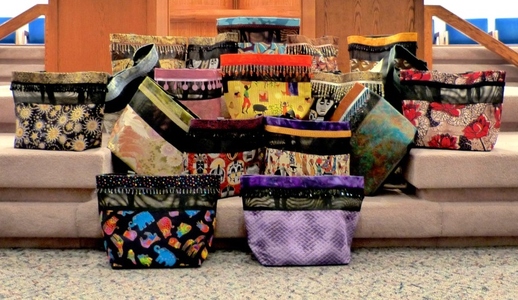 But locally, the biggest benefits to our Sisterhood are the connections and feeling of sisterhood that the program has created. When it was initiated the program was open to any and all women to join. Consequently it attracted a lot of women who were anxious to reach out to the world to do some “healing” and found that this was one of the best things that they could do. Perhaps not enticed to join any other Sisterhood program they now found an avenue that was right for them. We have new Sisterhood members because of the program.

Word of mouth and relationships outside of our Sisterhood meant that community outreach brought women to join the group who were not only non-members of a sisterhood, but were non-affiliated Jews and now find that our synagogue could be a home for them too. The bonds of friendship being formed go deeper than the working together to help the African grandmothers. It is truly a win/win situation for all involved.